It’s 1940, a year prior to Pearl Harbor being attacked by Japan and the U.S. becoming involved in the World War II conflict. The “blitz” is occurring in London with nightly bombings from the German Luftwaffe bombers which are impacting large numbers of the civilian population of England. President Franklin Delano Roosevelt is watching this unfold and becoming quite concerned that the U.S. is not prepared in the event that the Germans would bring the war oversees and attack American soil. While he is quite confident that the U.S. Military force is adequate, he feels that a civilian defense force may be needed to protect the cities and civilians of the country. This concept is not new and in fact during World War I there was a Council of National Defense developed and local communities set up defense councils to boost public morale. However, since there were no air forces at that time, the threat of an air attack to the U.S. was not a concern and therefore these councils really did nothing on the civilian defense front. During WWII however, air forces now pose a threat to the American Home Front and the need for a civilian defense force becomes more critical.

On May 20, 1941 President FDR signs an executive order that formed the Office of Civilian Defense and appointed Mayor La Guardia of New York City with overseeing this department. LaGuardia’s main goal is the protection of the American citizens. First Lady Eleanor Roosevelt, however, disagrees and feels that public health and welfare should also be included in the department in hopes of allowing women to become involved. LaGuardia, not wanting to deal with this aspect, hires Eleanor to assist with those aspects of the department. The new O.C.D. is looking at assisting with many aspects of life in the event an attack to the U.S, including things like fire watchers, auxiliary police, auxiliary fire, decontamination squads, rescue squads, medical corps, messengers, utility repair squads, road repair squads, bomb squads, emergency food and housing and many others. This offers men, women and children of the community the opportunity to volunteer and serve a role in this new department.

The most well-known department, however, is the Air Raid Warden. These are men and women tasked with protecting the lives of their fellow neighbors. By day, the Air Raid warden visits his neighbors and educates them about blackouts and what to do if an air raid were to occur – turn out lights, hang black out curtains, don’t drive or use the telephone and teaches them how to fight an incendiary bomb fire should one fall through their attic. By night, these same wardens will don their helmet, flashlight, gas mask, medical kit, air raid siren, gas alarm, whistle and maybe a stirrup pump fire extinguisher and patrol their neighborhoods enforcing blackout and air raid drills. These wardens take their roles quite seriously, sometimes even going to the extent of shooting out a light bulb if one is left on and no one is home, as he is well aware that any source of light could direct enemy bombers to his neighborhood resulting in public harm and potential destruction of the neighborhood or war material plants.

Fortunately, the war never made it to American soil and this Civilian Defense force was never needed and the organization was terminated in June of 1945. In 1950 it was resurrected by Harry Truman during the Cold War, called Civil Defense. This is when the well-known “Duck and Cover” drill became famous. Eventually the organization became what is known today as FEMA which helps communities during times of natural disasters.

NOTE: Information for this article was borrowed from an article by Stephanie Watson entitled “How the Office of Civilian Defense Worked”.
All photos below were taken by myself of items from my personal collection. You may re-size and use these photos as you feel appropriate within the article. 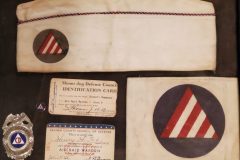 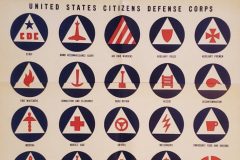 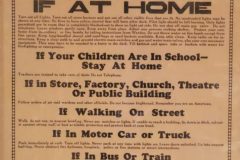 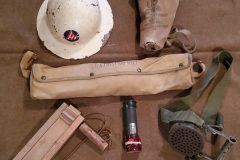 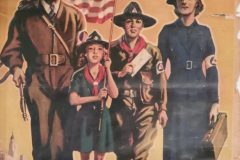 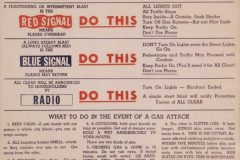 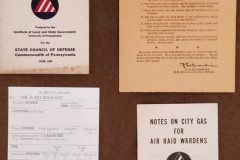