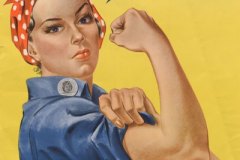 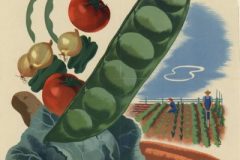 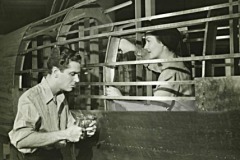 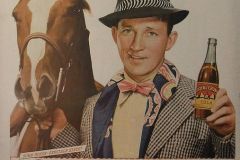 Toward this end a “WORK OR FIGHT” propaganda campaign was waged. “ROSIE THE RIVETER” posters beckoned housewives to leave the home and enter the nation’s factories. About 6.5 million females entered the workforce during the war years, many for the first time. African Americans continued the Great Migration northward, filling vacated factory jobs. Mexican Americans were courted to cross the border to assist with the harvest season in the BRACERO GUEST-WORKER PROGRAM. Thousands of retirees went back on the job, and more and more teenagers pitched in to fill the demand for new labor.

The United States government spent over twice as much money fighting World War II as it had spent on all previous programs since its creation. Tax rates were raised to generate revenue and control inflation. Some people paid 90% of what they earned toward taxes!

Still, more money was needed so the government again launched Liberty and VICTORY LOAN DRIVES like those that helped finance the First World War. In addition, the size of the federal government more than tripled from about a million workers in 1940 to almost 3.5 million in 1945.

The United States managed to raise enough food and raw materials in the First World War through voluntary measures. This time, federal officials agreed that only through RATIONING could the demands be met. Americans were issued books of stamps for key items such as gasoline, sugar, meat, butter, canned foods, fuel oil, shoes, and rubber. No purchase of these commodities was legal without a stamp. VICTORY SPEED LIMITS attempted to conserve fuel by requiring Americans to drive more slowly. Rotating blackouts conserved fuel to be shipped overseas. Groups such as the Boy Scouts led scrap metal drives. Consumer goods like automobiles and refrigerators simply were not produced. Women drew lines down the backs of their legs to simulate nylon stockings when there were such shortages. Backyard gardens produced about 8 million tons of food.

Additionally, the Office of War Information sponsored posters and rallies to appeal to patriotic heartstrings. Songs like BING CROSBY’s “JUNK WILL WIN THE WAR” and “GOODBYE MAMA, I’M OFF TO YOKOHAMA” were on the lips of many Americans. Propaganda movies shot by famed directors such as FRANK CAPRA inspired millions.

The accomplishments of the American public were nothing short of miraculous. The navy had fewer than 5,000 vessels prior to the bombing at Pearl Harbor. By 1945, they had over 90,000. In addition, over 80,000 tanks and nearly 300,000 aircraft were produced during the war years. Millions of machine guns and rifles and billions of ammunition cartridges rolled off American production lines. New industries like synthetic rubber flourished, and old ones were rejuvenated.

At tremendous cost to the American taxpayer, the American people vanquished two evils: the AXIS POWERS and the Great Depression.