The word Nisei, means 2nd Generation and most of the 110,000 people of Japanese descent living in America in 1941, were Nisei, born in the states, from parents who had immigrated to America from Japan in the early 20th century. Some of those who were relocated after Pearl Harbor for alleged security reasons were ISSEI (first generation immigrants), who could not become citizens of the U.S. due to a law called ‘The Oriental Exclusion Act.’ Some of the relocated were actually visiting citizens from Japan,  and only Japanese people living within 100 miles of the Pacific coast were incarcerated, due to concerns that Japanese forces would invade the west coast and that ethnic Japanese living there, would assist them. 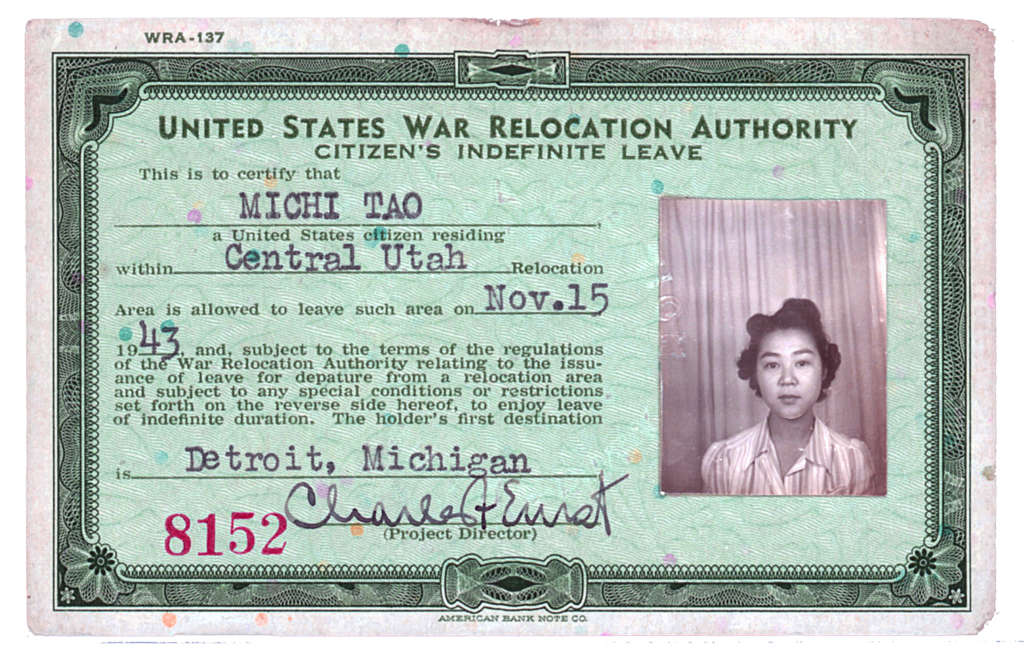 The story about this card, is, it was issued to my Nisei mother, Michi Tao in 1943, when she left the Internment Camp at Topaz, Utah, to take a secretarial job in Detroit.  At the time, she had already been incarcerated for about a year and 1/2.  She was born and raised in Hilo, Hawaii, but came to CA to live with her aunt, in 1936.  She worked as a secretary in San Francisco and would not have been relocated by the war, if she’d stayed in the Hawaiian Islands.  After Pearl Harbor, there were so many Japanese-Americans living in Hawaii, that it was a logistical impossibility to incarcerate all of them.  My mother was initially incarcerated in a horse stall at the Tanforan race track in San Francisco, while tar paper barracks’ were being built in the desert. After some months at Tanforan, she was loaded on a train with other Nisei, and sent to Delta, Utah, 60 miles s/of Salt Lake City and imprisoned in a camp called TOPAZ, which was

not an actual name of any town, it was just a fictional name given to the camp near Delta, UT. My father, who had been born in San Francisco in 1913, was a graduate of Stanford University and was raised in San Mateo, CA. He and his 2 brothers were tennis pros, who played in tournaments  all over the west coast and they owned a sporting goods store in San Mateo, called ‘Bando Brothers’

My dad, Mare Mark Bando was also interned at Tanforan and later Topaz and somewhere along the line, met my mother. When Nisei were allowed to leave the camp to take civilian jobs, they had no option to return to the west coast, but had to choose one of five cities in the eastern half of the USA. The options were Chicago, Detroit, Philadelphia, Boston or NYC. My mother came to Detroit and never left. My dad initially went to NYC, but was corresponding with Michi and in late 1944, he came to Detroit and married her. That is how/why I was born in Detroit, in 1949. I will search for my dad’s ID card and send you a copy when I locate that. I assume photo ID cards were not necessary while the prisoners were interned, but only became necessary when they left the camps and headed east to start a new life. I have a camp newspaper from Topaz and some other materials I will send you in a snail mail package. Thanks for your willingness to tell some of the Nisei experience in your museum.